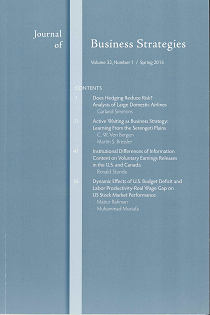 In this paper two approaches are applied to understand the hedging behavior
of companies which compete in the American airline industry (2007-2014) as they
seek to cope with the uncertain, future costs of jet fuel. The first measures the risk
that jet fuel prices will fall, a matter of concern to airlines that hedge against rising
jet fuel prices, for when jet fuel prices fall, those airlines that have hedged lose
money on their hedges. The second describes the risk of hedging or not by using
some of the tools of game theory. Two different cases are investigated. In the first
case airlines compete against one another in a market structure where it is assumed
that whether one airline hedges is of no immediate concern to its rivals. In this first
case hedging decisions of one airline produce no effects upon other airlines. In the
second case airlines compete against one another in the context of an oligopoly.
Hedging decisions of one airline are connected to the hedging decisions of other
airlines. If some airlines hedge jet fuel costs while at the same time others do not,
winners and losers are created among the competing airlines. The problem here is
that while hedging can fix the price of jet fuel, it cannot guarantee that this fixed
price will be lower than the price paid by a rival that did not hedge. The last part
of this paper is an empirical data analysis of the differences in jet fuel costs, net of
hedging results, is conducted. The null hypothesis that all airlines have equal jet fuel
costs after hedge results are accounted for could not be rejected at any reasonable
level of confidence.