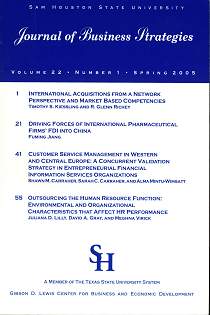 This paper presents the results of an exploratory investigation into the factors
that drove the international pharmaceutical firms to make foreign direct investment
(FDI) into the Chinese pharmaceutical manufacturing industry during the period
from 1980 to 1998. Research results show that international pharmaceutical firms'
FDI into China was predominantly motivated by China's specific location factors.
China's market size, with its great potential, played the most important role. The
factors of rapid economic development and growth, China's open-door policy,
and relatively stable political conditions were also found to be important factors.
The incentive policies provided by China had limited impact on pharmaceutical
firms FDI decisions. The results suggest that FDI decisions of early entrants
who started FDI before 1992 were more likely to consider the open-door policy
as the second most important factor, whereas late entrants whose FDI started
since 1992 seemed more likely to consider the Chinese economic development
and growth as the second most important factor. The results also suggest that
relatively stable political conditions in China have had a stronger positive
influence on the FDI decisions of the late entrants. Low labor and establishment
costs in China as well as cultural related factors were not found to be significant
factors/or international pharmaceutical investors.