Workers' Migration and Remittances In Bangladesh 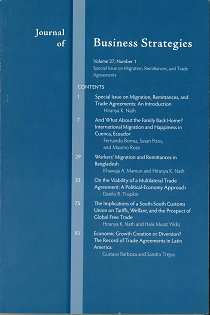 Bangladesh has sent more than 6.7 million workers to over 140 countries during
a period of more than three decades since the mid-1970s. Most of these workers
temporarily migrated to work in Middle East and Southeast Asia. This mass movement
of temporary migrant workers has, to some extent, eased unemployment pressures
on the over-burdened labor market in this highly populated country. More importantly,
the remittance transfers received from these migrant workers have reached
a phenomenal level of over 10 billion US dollars in 2009, approximately 12 percent
of GDP in Bangladesh. This paper analyzes the trends and various other aspects of
workers' migration and remittances in Bangladesh. It further discusses the micro and
macroeconomic impacts of remittances. While most remittance transfers have been
used by migrant-sending households for consumption, there is evidence to show that
these transfers have helped reduce poverty in Bangladesh. The analysis presented
in this paper further indicates that these remittances may have significant effects on
other macroeconomic variables as well.